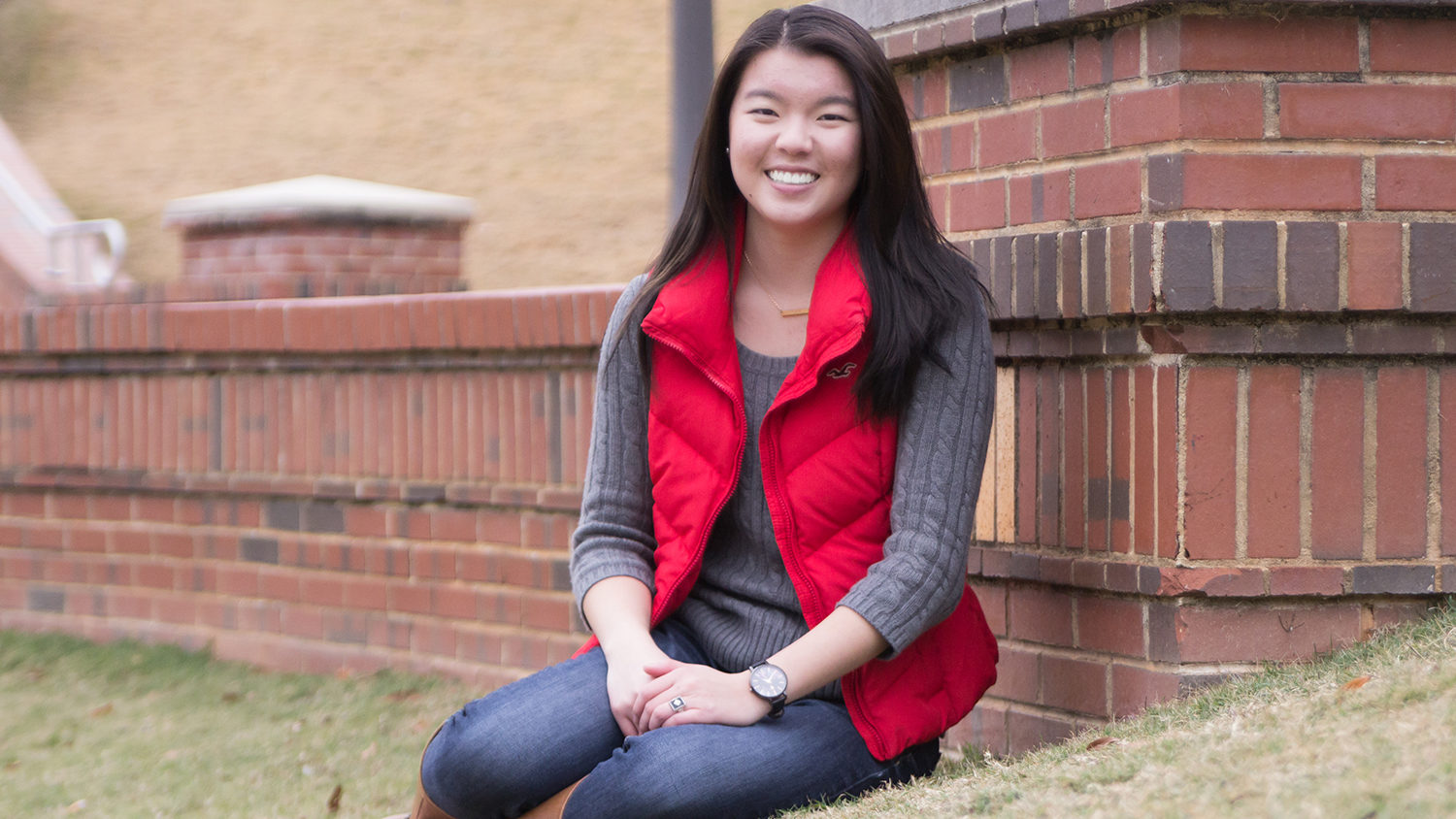 Goodnight Scholars Program: Tell us a little bit about yourself.

Emma Hall Transfer Class of 2019: As a transfer student, I was apprehensive to start at such a large university, but being a part of the Goodnight Scholar Program has helped make me feel at home. I am currently a junior majoring in biological sciences with a concentration in human biology and minors in nutrition and microbiology. Even though I grew up in the United States, I was actually born in China and left at the doorstep of an orphanage. I do not know the circumstances of my abandonment, but through God’s grace I was adopted. Since the age of four months, I have been blessed to call James and Catherine Hall my parents. I am the oldest girl in the family and the middle child of six, of which three are adopted. In fact the Hall family recently adopted from China for the third time! During winter break, we welcomed home baby Vivienne, making our family of eight a family of nine, and giving me another little sister. Although we have previously lived in Florida and New York, I have had the opportunity to call North Carolina home for the past ten years. Being raised with four brothers and in a big family has definitely helped shape my love for the outdoors and my competitive nature. My family loves spending time together over home-cooked meals, movie nights, or outdoor excursions. Outside of classes, I’m employed as a habilitation technician where I get the opportunity to work with special needs children and in addition to that, I volunteer in the Inpatient Pediatric Care Unit at WakeMed Raleigh Hospital. When not focused on school and work, I enjoy a lot of different activities, but a few include reading, running, playing the piano, snowboarding, sports, and honestly anything outdoors.

If you had to summarize your personality in one sentence, what would it say?

How would you describe your life as an NC State student?

Imagine being on your favorite roller coaster. When the roller coaster first begins, you start to feel jittery like your body already knows what is coming next. And when the drop comes, your stomach follows it, giving you that light fluttery feeling. The next thing you know, you’re holding on for dear life, screaming, and then smiling and laughing. The experience is thrilling and filled with periods of overwhelming adrenaline and sometimes even fear, but by the end of the ride you always end up happier than when it started. As a roller coaster fanatic, this is the best analogy I can think of to describe my life as an NC State student. It is like being on a never-ending roller coaster, but in the best way possible. You always have those highs and lows in life that may overwhelm you, but throughout the journey you have family, friends, and faculty who make you laugh and enjoy the ride. By the end of the ride, even through the lows, it’s all smiles and you’re just happy to be alive.

Is there a particular accomplishment you’ve made at NC State that fills you with pride?

I think it is safe to say that this accomplishment goes unspoken for all the Goodnight Scholars, but I would honestly have to say that receiving the title of a Goodnight Scholar fills me with pride. I was fortunate enough to be able to participate in two scholarship programs while at Johnston Community College, but I never imagined that there was a possibility of a scholarship for my entire undergraduate degree. Honestly, I had not heard of the Goodnight Program while I was at my community college, but when I received that email I couldn’t fathom what I was reading. I actually stared at my computer screen just re-reading the email ensuring I understood what it all entailed. I didn’t want to get my hopes up just yet because I knew the logistics of the numbers and the competitiveness. The whole spring semester became one filled with anticipation. I was going to graduate with my associate [degree], waiting for admission decisions from universities, and applying for a life-changing opportunity at NC State. Making it to the [Goodnight Scholars] interview process was unbelievable, but it caused more anxiety. That interview was so nerve-racking I probably could have passed out. I finished the interview with the sinking feeling that I was so close and I blew it. The date for the final decisions could not come soon enough, and when I received a congratulatory email on April 28th from the Goodnight Scholars Program, which is still in my inbox, I was speechless. I literally jumped up and screamed, running frantically around the house to call my parents and tell them the good news. I remember feeling like I was on cloud nine and immediately sat down and prayed, thanking God for this blessing that I never imagined would be a possibility for me. Just goes to show how God works wonders when you least expect them. Being a Goodnight Scholar has been my greatest and proudest achievement thus far.

What is one experience you need to have at NC State before you graduate?

Before starting at NC State, I had made a mental list of accomplishments that I wished to achieve. The most important one for me is gaining research experience. Research started to pique my interest ever since my beloved grandpa, Dohn Mahan, passed away in 2013. Being diagnosed with Parkinson’s disease, my grandpa loved to hear about my dreams for the future. I remember just sitting and conversing with him about anything and everything. He would enjoy listening and giving me his iconic inspirational speeches. It was during one of those speeches that an interest started emerging. I remember one day after our long conversation he had turned to me with a smile and just said “Emma, I know you will do amazing things with that God-given brain of yours, as long as you put your heart into it. I wouldn’t be surprised if you, one-day helped find the cure for Parkinson’s disease and when you do, let me know, because I will be your first patient.” Every time I start to become overwhelmed with school, I reminisce about this conversation and use it as motivation to keep pursuing what I love: science. Even though I am not certain if I want to pursue research as my career or conduct research on the side, being able to gain the experience while at State will help solidify that interest into a more tangible idea.

Tell us about your time in the Goodnight Scholars Program.

Even though my time in the Goodnight Scholars Program has been brief, I have already made connections that will last a lifetime. My time in the Program has been nothing but positive. I have already attended so many programs that have helped me develop as a student both academically and professionally. Furthermore, through social programs I have been blessed to meet and spend time with some amazing people. One of the highlights for me was volunteering for Habitat for Humanity. It was so rewarding seeing Goodnight Scholars, who devoted their Saturday to the project, collaborate together as a team to help build a family a home. It was truly a gratifying experience.

Any unforgettable moments from your time in the Goodnight Scholars community thus far?

There are already so many unforgettable memories, even in my brief time in the Program, but I would honestly have to say the Transfer Summer Retreat. It was one of the most exciting yet nerve-racking experiences at NC State. Coming from a small community college, it was intimidating to step into such a large university not knowing anyone. Realizing how important first impressions are, I was both anxious and eager to meet the staff of the Goodnight Scholars Program and my transfer cohort. Looking back at it now, I have no clue why I was so nervous. Before I even entered the building, I instantly felt comfortable thanks to some of the best retreat leaders out there, shout-out to Sid and Nishant. Walking into Peele Hall felt like visiting a childhood friend. The Goodnight Scholars Program staff welcomed me as if we had known each other for years. It was then I realized that everyone else was in the same position as me, and we were all enthusiastic to meet one another. The day was filled with activities to encourage us to converse and collaborate as a cohesive group. My favorite part was the campus scavenger hunt which allowed for some friendly competition while learning about the campus. We all had a blast getting to know each other, even though my team didn’t win and that’s still a sore topic. If there was ever a more efficient technique to finding your way around campus, a scavenger hunt will do the trick. Most of the time I was clueless as to where I was on campus. I couldn’t even get to Talley. Trust me, after the scavenger hunt I was able to navigate around campus like a pro. Slightly.

What does being a Goodnight Scholar mean to you?

For me, a Goodnight Scholar means so much more than being a recipient of a scholarship. I was blessed with this amazing opportunity to study at NC State because someone believed in my future potential. It is using that education to give back to my community and pay it forward. It means being a part of a network of friends with similar passions who will encourage and push you to achieve your goals. It is being innovative, creative, and curious about the world around you and wanting to bring about change. Being a Goodnight Scholar has become part of my identity and I am blessed to be a part the Program.

Where do you picture yourself after graduation?

There are so many doors that have opened my viewpoint since being here at NC State and I am excited to see which door God will open. However, there is always this recurring dream that I believe God has called me to fulfill. Maybe not now, but in the future. Ever since I can remember, I have wanted to work in pediatrics in some capacity whether it be as a physician assistant, through research, or another route. If I could travel anywhere in the world, it would no doubt be back to China to visit the orphanages and to provide the support and help that the children need. The children who are in the same position that I was once a part of, living in an orphanage, forgotten. They deserve so much more in life and I can be that one person to change thousands of lives. God advocated for me by giving me a chance and I wish to give that same chance to others. If I could have the best of both worlds, I would be accomplishing this dream alongside research in Parkinson’s disease.

This post was originally published in Goodnight Scholars Program.

When communication major Ruhama Wolle steps up to the podium to give NC State’s student commencement speech on Saturday, May 11, she will do so with great pride, and with great humility.