Ask Ben Falero about nanotechnology. It’s kind of his thing. 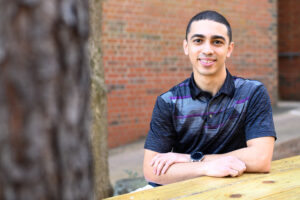 when you ask him about it, his eyes will light up at the challenge of explaining what nanotechnology is to those of us who can’t hear the word “nano” without imagining Iron Man. But Ben appreciates a challenge; he’s not scared by the idea of going to the atomic level to make our laptops and cell phones smaller. Pursuing a double major in computer and electrical engineering in the NC State’s College of Engineering, Ben is a passionate learner whose interest in computers extends beyond the classroom. When he’s not learning the ins and outs of nanotechnology, Ben can be found working with NC State’s IT department in the College of Natural Resources. With the help of the C3 program, he has been able to get hands-on experience working with computers as the go-to guy for technological difficulties.

Ben learned about the C3 program through his dad, who works as an advisor at Central Carolina Community College, where Ben began his college journey. He was not initially interested in the program, though his attitude quickly shifted  as he researched the program. “I read into it a little bit more, and saw exactly what they did, and it was right up my alley, exactly what I needed.”

Ben has tackled challenges at NC State head-on, though that doesn’t mean he hasn’t had to make some adjustments. He highlights altering his studying habits as one of the biggest challenges he has faced since coming to NC State. Balancing time effectively is a struggle for many students, especially given the adjustment to online learning due to the COVID-19 pandemic. For Ben, his biggest change was learning to work with study groups, which has helped him understand complex concepts.

Ben is much more than an engineering student. Growing up in Brooklyn, New York, Ben developed an affinity for Yankees baseball and life in the city. When he moved to Fuquay-Varina at the age of seven, it took him a long time to get used to a much quieter area. “I even remember the first night that we were here I couldn’t go to sleep because it was too quiet.” But he found just the right balance at NC State – a place Ben says is big enough to have everything you need, but with the welcoming, small-town feel of Fuquay.

In his spare time, Ben loves to play sports. His favorite sport is baseball, though he has avidly enjoyed his time on the soccer field and the basketball court. Outside of hitting home runs, Ben enjoys spending his time deconstructing computers and figuring out new things. Ben approaches life with a constantly curious mind, always looking for new answers. “I don’t like not knowing, and so, when someone tells me something I’m always like, ‘What does that mean?’” 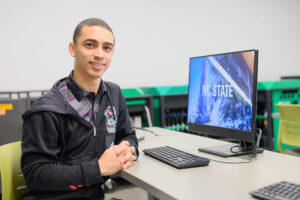 Ben is extremely grateful for the C3 program and the opportunities he has been able to access through it. “My family loves this program and, to be honest, I can’t blame them. The C3 staff has been there for me if I need anything. They’ve opened doors for me in ways that I wouldn’t have even seen.” Ben intends to graduate in May of 2022, and wants to work in cybersecurity to make the world a safer place.

Running the race when the time is right: Jacob Hunt