Dan Webb is an entrepreneurial student in the College of Management here at NC State who has consistently used his ‘Think and Do’ attitude to exceed expectations. From jotting down ideas for new businesses in his trusty notebook and pitching those ideas to his customers, to helping swear-in the NC Secretary of Commerce, Dan’s embrace of the Wolfpack motto has given him some incredible life stories. 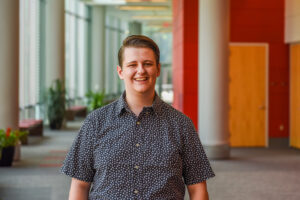 Utilizing a background in studying design as well as marketing, Dan has found himself in many unique roles. He works with First Flight Venture Center, a research center in Durham that specializes in the support of science and technology businesses. In this role, he’s helping to manage a $2.6 million dollar grant. He’s built a number of businesses from scratch, taking the idea to practice then passing it along to others to manage.

Dan is no stranger to difficult situations. Despite hard work and success in the business world, he has often faced challenges achieving the same success in the classroom. Dan initially applied to North Carolina State University from high school, but was not admitted. Undeterred, he began taking classes at Wake Technical Community College, and eventually found the C3 program. The C3 program helped to re-instill Dan’s confidence in completing college, and helped bring another one-of-a-kind mind to NC State. Dan hopes to broadcast the message to all students that even if success does not come as easily to you in the classroom, you can still take the initiative to pursue your passions and find happiness.

“C3 is designed to help students that show initiative and show the ability to succeed to just go ahead and try.” 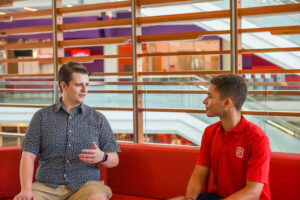 NC State is the ideal landing spot for Dan Webb as he attempts to make a big splash with creative business ideas. With so many resources available to students across a wide variety of departments, NC State students have ample opportunity to access their potential and accomplish the unthinkable. Dan describes the NC State environment as “a mixture of almost everything that you need to start a science or technology based business,” and he’s taking full advantage of the offerings through NC State’s entrepreneurship initiatives. He’s finding himself right at home on campus, where students are encouraged to take their passions beyond their classes. Dan has not taken the opportunities available to him for granted, using his mind and his surroundings to access new avenues and impact the world around him. This approach to life is emboldened by NC State and the C3 program, and is a sign to all students that hard work and initiative can be carried into everything you do.