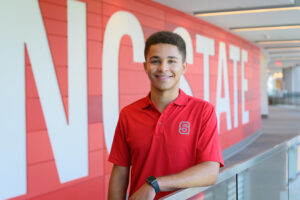 For the beginning of nineteen-year-old Jacob Hunt’s high school career, he found little interest in sports or academics — he was drifting a bit. But that changed when he discovered track and field. “I never thought I’d play sports. I don’t know why; I wasn’t really an unathletic kid, but I just never really thought of doing it. […] It looked terrible.” Having once doubted that he could “run miles and miles every single day,” with a nudge from a friend, Jacob joined Cleveland High’s track and field team. Quickly, running became the “best thing ever” to him because his team felt like a family. Jacob recalls his first race was a blazing 105-degrees and two people had a heat stroke! That didn’t scare him away. The escape Jacob finds in running provides sufficient motivation for him to stick with it. “When I [need] a break from school, I run a few miles and feel better. Even if you’re having a bad day, a good run can save the whole day.”

Residing between Clayton and Garner, two towns local to NC State, Jacob says he’s been a longtime Wolfpack fan, and he’s ready to soak up beloved campus traditions. Jacob has even participated, twice, in the Krispy Kreme Challenge. “[Next time], I’d probably slow down the first part of the race a little bit and let the donuts soak [in the water] a little longer.” If you know, you know. Jacob also already sees himself going to as many home games as possible. “Probably the thing that I’m most excited about is the football and basketball games. […] When we could actually go to games I went to half of them, almost every single one that was home. I even went to one by myself.”

Still, Jacob’s familiarity with NC State wasn’t enough for him to attend the university after graduating from Cleveland High. Unsure of what path to take, Jacob decided to refrain from the traditional route of enrolling in a four-year university straight out of high school, despite his counselor’s recommendations. “I was told by my counselor that I was ready for a four-year, but I wasn’t ready.”

Have you ever trained for a marathon? The preparation can be arduous and time intensive. Even with an excellent academic standing, not every high school student is ready to run a metaphorical “university marathon” upon graduation. Societal norms often make students feel like they have to do this, but the traditional admissions process into a university is a marathon that some high school students are not ready for–and that’s OK! 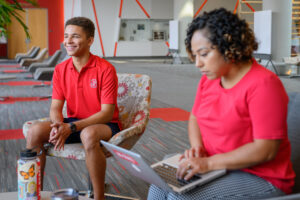 As Jacob explored post-graduation alternatives at his high school’s college fair, he discovered and applied to C3 during his senior year. Jacob says his high school was great about sharing opportunities outside of the traditional university admissions path. The guaranteed acceptance, one of the many benefits that C3 offers, grabbed his attention. “[I] already wanted to go to NC State anyways, so I actually took the pamphlet and got into [the program].”

Dually-admitted to Johnston Community College (JCC) and NC State through C3, Jacob’s first semester at JCC began when the pandemic started; as if attending college wasn’t challenging enough. Though he’s enjoyed the flexibility of having online classes, he’s acknowledged that there was no way he could have taken calculus online and when given the opportunity, he took it in-person. Jacob also shares that many of his friendships changed. It’s completely normal: interests change, people move away, and of course, there’s the pandemic. “It was all at once,” says Jacob. Finding the motivation to do online school work in the midst of a pandemic was an abrupt, unique challenge for students. Accountability seems easier when instructors and peers are face-to-face, but when stuck at home surrounded by several distractions, procrastination can easily seep in.

C3 has given Jacob motivation, accountability, and a goal to aim for: maintaining a 3.0 GPA to ensure admission to NC State. Jacob says that he’s relieved, but “not too relieved or too chill” now that he’s been dually-admitted. He realizes that while he’s been guaranteed admission, he’s got to keep up his grades to get into the major he wants. “I’m already guaranteed a spot [at NC State], but I know that I’m not guaranteed a spot in the school that I want, so that has kept me motivated.” Jacob plans to transfer in Jan. 2022, and with the extra time, he knows he’s ready to run the race now. “I might’ve slacked off or done the minimum amount of classes, but [C3] gave me the motivation to get all my classes done.” In the same way his high school cross country team gave him a community to keep him motivated to run on the hard days, C3 has given him a network of others with similar backgrounds to keep him engaged. 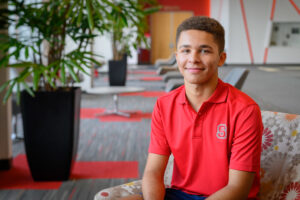 At one point, Jacob was uncertain about his post-graduation plans, but through C3, he feels more confident with his decision. “I didn’t know what I wanted to do in life. I had no clue about anything, so I just went to community college to figure out what I wanted to do. Turns out I really like business.” Right now, Jacob has decided to major in business administration. Although he hasn’t chosen a concentration yet, he can rest assured knowing that his C3 advisors will help him figure that out along the way.